Once upon a time my boyfriend bought this incredibly soft sweater. It was made with the finest of lambswool and it was a great fit for him. I couldn't stop petting him. The Cat's were equally fond of the sweater. All in all it was great sweater. 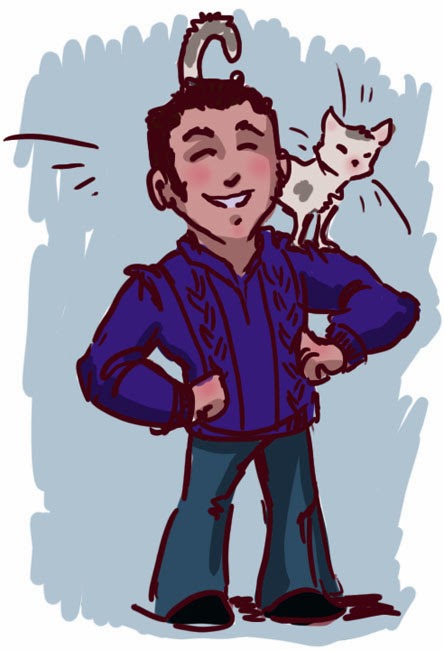 But then disaster struck... He hand washed it and hung it up to dry. And then the sweater grew... and grew... and grew some more. Till it was completely out of shape and it was never worn again... 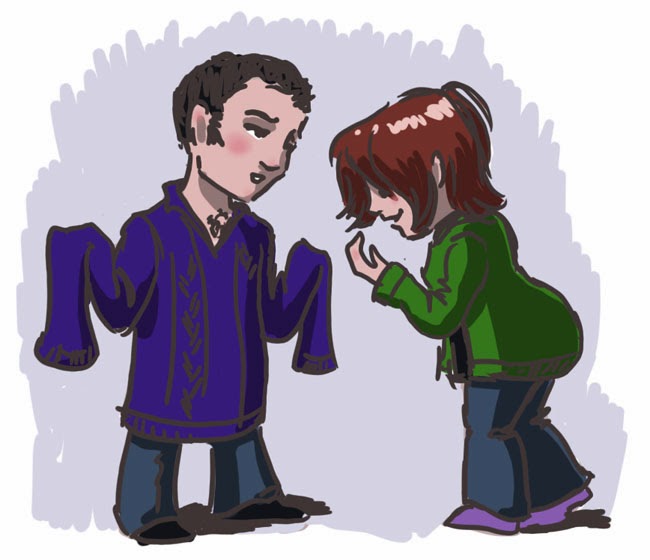 After months the poor sweater still hung sadly in his room and then one day, just for shit and giggles I put it on. 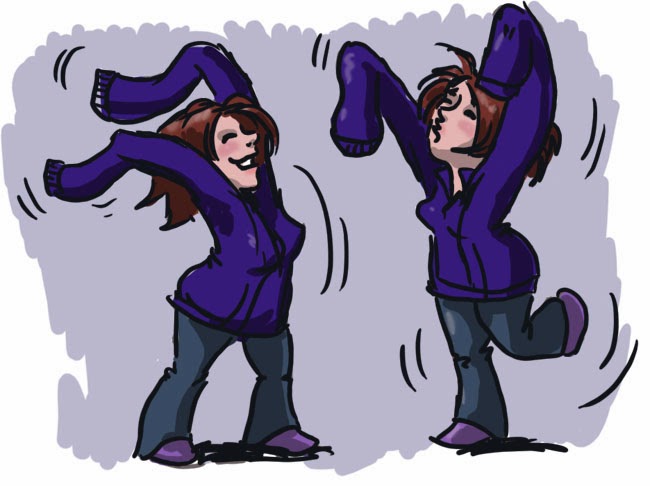 The arms were still too long for me, but I was surprised to find that my big butt made the sweater not that long. Which was when I asked for the sweater to have and got it. I had big plans for the softest sweater in mind. SWEATER SURGERY!

Now I followed a Craftsy Class with Carol Feller about this subject and really wanted to shorten the sleeves so I could wear the Softest sweater. So I started to work it. I opened the seams till the point that I wanted to shorten it and cut one stitch. I guess that the needle size would be  2mm and hoped that would be correct. I like to live dangerous sometimes...

Then I proceeded to unravel the stitch and put the stitches above it on the needle. When all the live stitches were on the needle I did the same but just above the ribbing of the sleeve. Then I had to graft them together.

MY mind was BLOWN!

I tried it and suddenly it was so easy to memorize it! 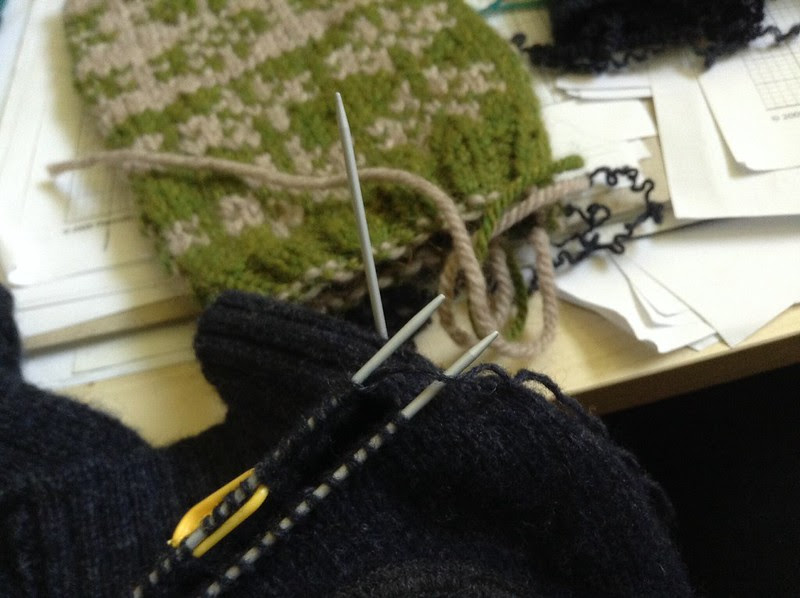 Here I am in the midst of grafting it with a knitting needle. (The yellow thing is a stitch marker. Above you see a swatch for a Boreal. ) My grafting needle is vertical since I need to hold the needle between my legs to be able to do this. 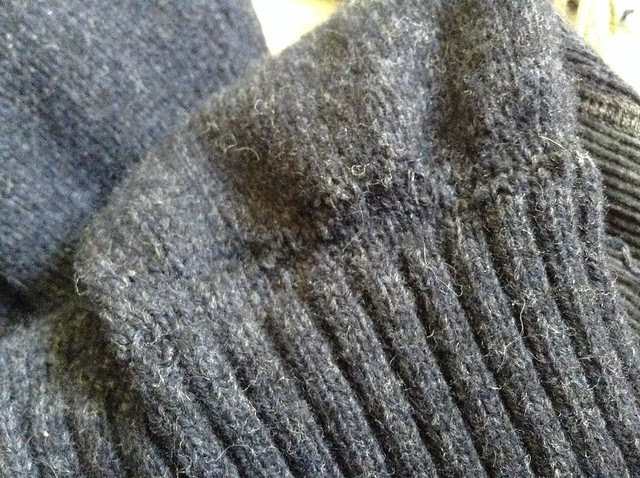 Here is the length of knitted fabric I removed. It is not that great of a picture and I have to admit I unraveled it some more to get enough yarn to do the graft, but I hope you get the idea... 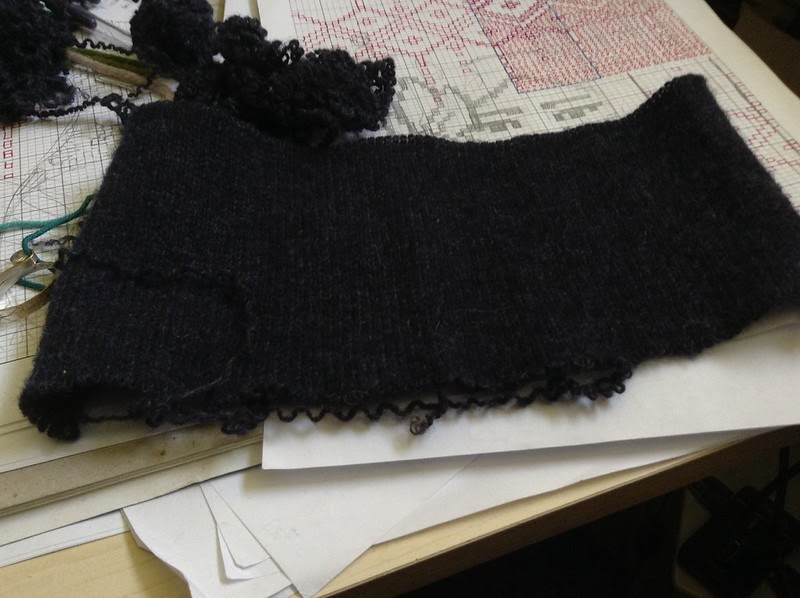 And now I only have to do the same thing to the other sleeve and I have the Softest Sweater to have and to wear. Right at the moment when Spring is here! Hurray!!!

------
Disclaimer: Sketches were made probably a little bit too quick and I do need some more practice with computer drawing, so please excuse the shabby art... 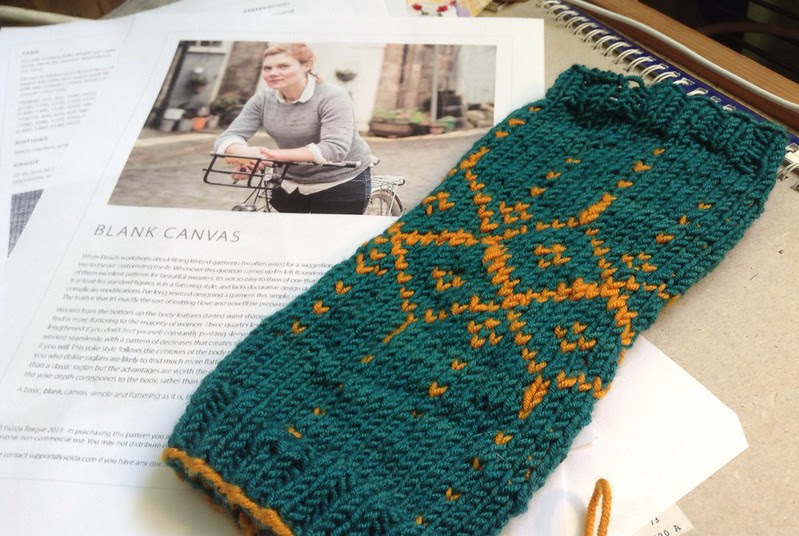 Not sure what is the matter, but I'm not that well, and so the swatching for the Blank canvas by Ysholde Tegue project is sloooooooooooooooooow. And confusing. I knitted it in the round on a 3,5mm and I got 23 stitches by 26 rows. But I was also struggling with re-learning to do stranded work with a knitting ring. (Not pictured, I am thinking of doing a Blog post on my knitting tools soon.)

The perfect gauge would be 22 by 30. Which in my eyes was dreadful, because I wanted to knit this sweater in the round on 40cm DPN's and guess what... There are NO quarter sizes. AT ALL!

I guess I was lucky to find such large DPN's new and for a fair price, even though there are only four needles in one package, so you would have to buy two to be able to knit in the round with 5 needles. They are Addi large sock needles and only come in half sizes or whole and range from 2mm to 5mm.

I got the idea to do this in this way from an old painting by the way. The painting dates back to 1400 and was made by Bertram from Minden. In it you see the Madonna knitting away on a red/pink (?) sweater and she has reached the top on the sweater. She probably is decreasing and thinking about the best way to create a collorband. Maybe with Jesus in mind or herself. It is a fetching little sweater after all. Looking a bit closer she is using four needles and fairly thin ones as well. 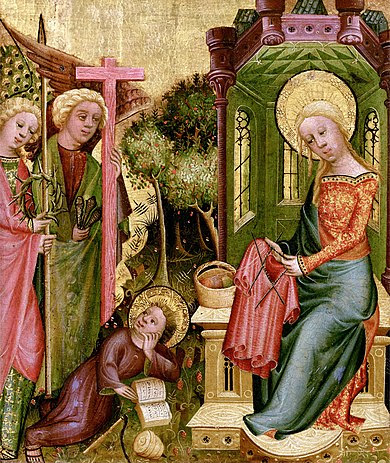 But when I first saw it, I thought she was using five needles and finally in my mind I would be able to do what other people have done before me. Knit a sweater in the round. Without circular needles (which I cannot use...). Which is a miracle, at least for me.

To get back to the swatch, because I was unsure how to continue I asked the Ysholde Tegue board on Ravelry and I got another miracle. At least if it works that is... Somebody commented that there are old UK needles sizes and they might have old DPN needles they don't use anymore in the sizes I still need. In my eyes that would be amazing and so terribly helpful. They are UK sizes 9, 10, 12 and 13. Which would give me access to 3,75mm, 3,25mm, 2,75mm and 2,25mm long DPN's. I'm keeping my two fingers crossed. 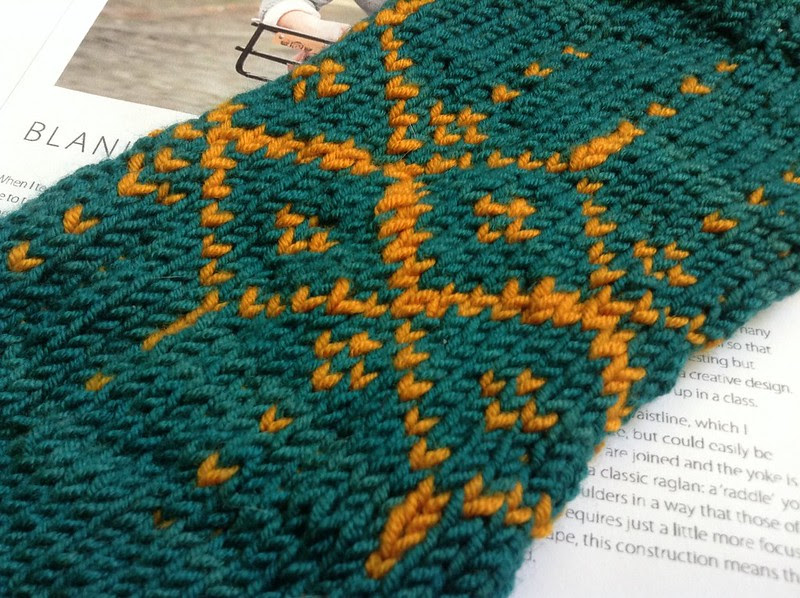 Into the big frog pond

Once upon a time there was this glorious pattern. This magical pattern was a Cardigan. Yes, with a capital C, because it was glorious. It has a princess fit which I already knew looked good on me and  it had intricate cables running along the front and the backside, and I could just imagine it in green. A Irish knit cardigan and I lusted about it.

Best thing was that it was a free pattern from Drops Design. So I waited till you could buy the magazine and I bought the yarn. Well, a bit more then the pattern said I needed, because I wasn't a fool.  Or so I thought...

I decided that I was going to knit it in the round and steek it afterward. I just found 40 cm long dpn's and I couldn't wait to try this mystical "knitting the sweaters" thing in the round out.  I patiently swatched and calculated what I needed for my size. I started with my cardigan in November 2012.

The problems started when I decided that I didn't want a garter bottom. Instead of riping out what I already had on the needles I dropped stitches and made it into a short ripped edge. This dropping of the stitched went alright, but the end result was not tidy and at the time I decided it looked alright. But ofcourse it wasn't... 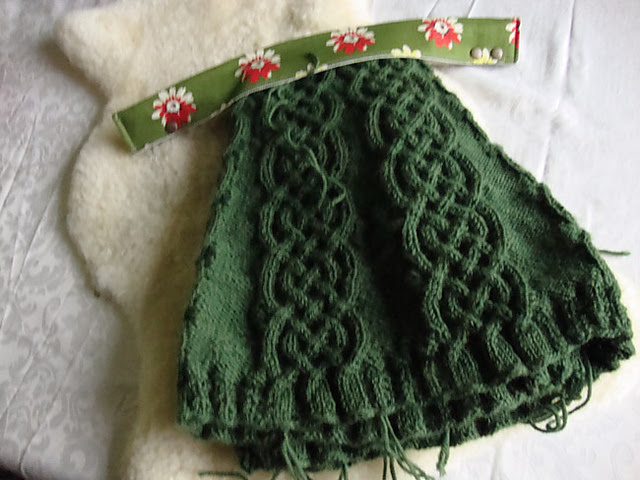 I don't know what I do but apparently I don't knit as tight ands neat when I  k2,p2. This is probably the reason why any sane knitter uses smaller needles when she ribs. *facepalm*  Anyway, as you can tell from the picture I got really far.

Not being shy of frogging I ripped back and started again and then I started to look at the body again and found mistakes with the crossing of cabled and so I frogged that back too, since just dropping the stitches didn't work sadly this time.

With good cheer I continued knitting everything ones more, how ever mistakes just kept popping up. In September that year I really stood back and took a good look at what I had to show for all my curses and sweat.  I once more had to rip back, because I had increased too much for the bust. (wishful thinking? ) And finally my logical thinking set in. There is about 10 cm difference between my left and my right arm. There was no way that I was going to have a neat joining  in the pattern of the arms and the body, if the sleeves were going to be knit from the bottom up.

This let to more curses and despair. And the cardigan, my beautiful Irish green dream cardigan vanished into area 51 in my home. (So named because of many UFO's there. Un Finished Objects)

This week I finally got the courage to maybe give the cardigan a new chance. I ripped out the sleeves I had and the proceded to try my hand at some sweater surgery. I snipped one stitch, and tried to rip out the bottom to hopefully reknit the thing as I wished it. What I didn't took in account was the cabling. I got hopefully stuck in a tangle.

That's when the whole thing took a  one way trip to the frog pond. No princesses with golden balls lingered there. No magical transformed frog prince. For your information...

Just green woolen balls. And a lot of tears....

Is it springtime yet?

Adventures in knitting, with dolls, art and probably a cat or two. Snails might be included...

In other news, I finished the Smell as Sweet shawl from Kitman Figueroa.
Link to Ravelry.

Finished as in knitted, blocked ends woven in, and finally the picture taken and entered into Ravely. Otherwise it doesn't count right? 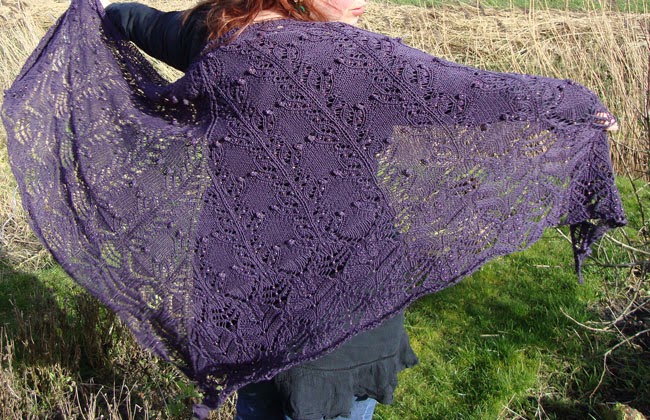 The only thing I changed were the nupps. I really didn't feel like doing them. Instead I tried bobbles. They are an easy and small 3 stitch bobble with in the middle a bead. The bobbles were suppose to be a rose, at least in my imagination they are roses.

Not much knitting going on here after that mayor shawl came of the needles. I am planning. Sure... I've bought Wollmeise dk to make a Blank Canvas by Ysholda Tegue. Partly paid for by The Boyfriend. He wanted art. I wanted Wollmeise. Seemed like a fair exchange. I made a Plague Skaven Rat  Ogre (Apparently, I'm not that well versed in Warhammer) in Aquarel, which I regrettably failed to scan in. Maybe now that I've pledged to create art and knitting for fair wages, my art mojo might come back. One can keep hoping....

I guess that will be my first Blog post. I've thought about doing this for a long time. I guess I should introduce myself, but I am not sure if I get a lot of readers. So here is a short introduction to myself.

Of course I'm much much more then that. But does anyone need to know such things in the beginning of a blog friendship? Surely not.

With this blog I hope to get have place where I can post my art and knitting things.